On Friday I celebrated five years of marriage.  Paul took off from work and we enjoyed simple pleasures like a lunch of bruschetta, crustinis, and wine, swapping gifts, listening to our wedding song, and escaping, thanks to my sister and her boyfriend, for a wild date night of shopping for new dinnerware in between nursing sessions.

I also finished updating a sorely neglected anniversary memory book.  The task required pilfering Facebook for photos and details from our past.  Writing about each year was taxing.  I had to condense a great deal of events into a fairly small space, avoid repetition (even though our lives, upon reflection, proved a testament of gravitation toward familiarity), and grapple with so much discarded by memory loss. How is it I could how forgotten about fearing I couldn't get pregnant or how Paul's makeshift 5 ft x 5 ft office space in the corner of our living room made us laugh when his tax documents had no option for noting so small a square for business purposes? 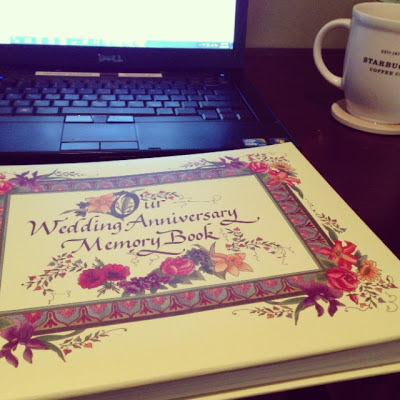 Paul and I have big hopes and plans for the next five years.  While the first five thrust itself upon us, we'd like to think we are taking the reigns a bit more in the years to come, putting 1st our core values, protecting most each other's hearts, and working harder each day to fulfill readily the exponentially increasing needs of our family.

To sit across the table with him and listen to him talk of where we've been and where he would like to see us reach, I smiled to think of how cobbled together our love was at first.  Others can profess of walking down the aisle to a happily ever after just as pitch perfect as they ever imagined, but Paul and I would be the first to raise an eyebrow or laugh at that.  I walked down the aisle and said yes to a life of finding selflessness in the folds of a laundered shirt, the Skype call of a far away spouse, a pee filled pregnancy stick, the ladling of soup and the grasp of a hand ... in the guise of some noble abstract vows. I did sign up for that fairy tale too, often marveling at the gift of both a constant best friend and a hunky husband at my reach, but sometimes the fairy tale gets interrupted by the blare of another story, the call to do the opposite of feeling the sun on one's face: the call of touching darkness, knowing pain, finding the need for selflessness thrust upon us.

I almost quit college. I almost became a nun.  I hesitated for some time at the intersection of Loneliness crosses Religious Life.  It was in the first or second week after my sophomore year that I spent four days within the walls of the convent of the Sisters of St. Francis of the Martyr St. George.  It was there and then that I took further consideration into what I felt was a call which could be responded with, on my part, a relatively easy answer: yes!

The closing door there came quick by way of the Mother Superior's wish that, even though a seemingly happy fit for me, I should instead chase after my initial desire of being married.  How awful I felt for months afterward! It was the knows-no-boundaries-joy that I experienced at the convent that left me feeling so sad. I couldn't imagine ever finding a place, a relationship that would ever allow me such joy.

Even though I timidly wanted to be married 7 years ago in Mother Superior's office, I could not have been more wrong about what marriage meant.  It's place as a vocation is just as prominent, beautiful, and noble as religious life.  To my greatest surprise, there's just as much joy in marriage as anyone could ever want. Lest you think that's synonymous for Paul and I are in total bliss, it's not.  That just to say it's available for purchase through a steady stream of sacrifices.

If I think of the distinct difference between the Paul and Ashley of five years ago and the Paul and Ashley of today, it's in what I think is our understanding of sacrifice.  While our younger selves couldn't grasp how much was necessary in truly loving another (plus three), our current selves can see it in lucid glimpses and are ready, on most days, to answer the call.

Marriage is no cheap trick.  It will be the most difficult endeavor I will have said yes to when it's all said and done.  I was given no manual.  I know no promises by way of fate or luck or free will.  I have searched all the books and only found a fraction of the answers.  And on top of it all, the impression that marriage is here to fuel the fires of happiness is only true in light of the work, work, work, and more work that gets us there.
It didn't take getting married for me to figure out that I made the right choice in not turning left at Religious Life.  The only right choices I've ever made were in loving others as Christ loves me and I hardly ever get that right.  Those opportunities could have been in the convent or out of it.  I'm very happy that I bumbled my way into donning the white dress and taking on the Anderson name.  It's in that I've found endless opportunities to love as Christ did which is a pretty way of saying I've been in pain a stupid amount of times because of selfishness. The sacrifice of growing up, letting go, and giving to others has surprised me over and over again, often in what initially feels like some sick joke, and it is with this I've come to know a joy which pierces my heart and makes me feel free.

And to be honest, we all did worry I would pull a Sound of Music on the life of contemplation.  While all the Sisters would be working selflessly on their path to joy scrubbing dishes, polishing pews, and teaching children, I'd be found sneaking off for solo dancing sessions in the corners of the convent.  Everybody knows Sister Mary Ashley likes to bust a move!

Posted by Ashley Anderson at 12:47 PM