A Trip to the Library

If you knew the trouble I went to this morning so that Thomas could sit with his peers during story time at the library, you would be scratching your head. I mean, it's not like they're handing out cash prizes or anything, so what would possess someone to throw all her energies into a 45 minute program which could be just as well pulled off at home with a high pitched voice and some extra juice in mommy's coffee to put into play the I'm-crazy-big-eyed-and-enthusiastically-into-kids effect those librarians are so keen on?

First, a run down of what I did to prep. 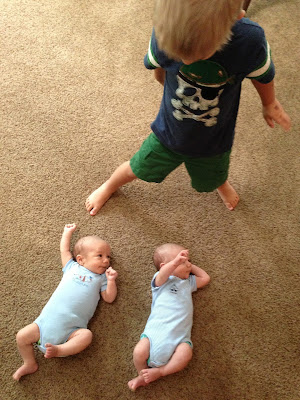 I closed Thomas into his room after breakfast and reminded him not to leave until I was done with my shower and had told him so. Just another episode of mommy having alone time in the bathroom but praying every second that one, or all of her kids, aren't maimed as victim to one of Thomas's stunts, maybe climbing furniture or throwing things in the directions of the twins (like this morning when I overheard him say "catch 'em Emerick" and looked over to see two binkies fly into Emerick's lap).  Momma was not leaving this house without a shower.  My prayers worked. Thomas did not die. He stayed in his room and managed to keep his body at ground level, or so I'm letting myself believe.

A super early dressing of Thomas, frantic cleaning of the kitchen, poorly timed nursing of the twins, two sets of diaper changes and a collecting of enough bags it appeared we were headed out to someplace way more fun than the library, we loaded in the Vue and had time to spare. I caught my breath and smiled as we made our way through the neighborhood and to the library which is just a hop, step, and a jump away from our borders.

I was feeling pretty good about myself until I opened up the rear door and saw that the carrier I wanted was not with us.  Fearing I might not be able to adjust this carrier by myself, ultimately leading to a baby slipping out and me catching it by the arm right as everyone turned to see that woman put her child's life in danger just so she could escape her home and not lose her mind, I made a split-second decision to jump back in the car, reverse our hop, step, jump and drive, and quickly grab the carrier that is somewhat less likely to send DFS my way.

Now back at the library I awkwardly make my way into the building: one baby on the carrier I just retrieved from the laundry room, one baby in a pumpkin seat I buckled him in once parked because the babies don't actually travel in pumpkin seats, and Thomas in front of me graciously putting his button pressing skills into action so his mommy can bring da brudders in wit her. I'm not sure he knows what chivalry is yet, but I'll take it.

And this story arc fumbles here. It's a cold stop where would be an awesome climax of shrieking babies and a toddler whose said something awkward just at that moment everyone can hear like "Does her have one boob?" (no, that comment is claimed by yesterday at Orange Leaf--no red face making comments today). The chaos actually came later when a library director asked to tape me check out books and exit the library with my clan to show the community proof we need a drive-thru window at Brentwood Library (which inevitably led to setting up the camera, and taking the shot, and retaking the shot, and what's that?, my baby is sweating because this is taking too long... but just one more shot please ma'am, thanks, *smile*). 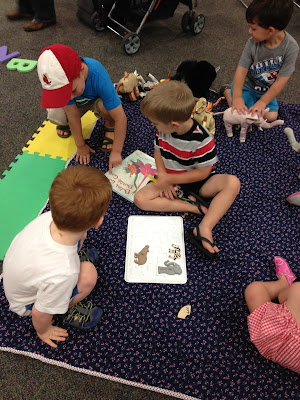 No, story time itself was a breeze.  I swayed both babies in my arms, imagining my biceps bulging from the straining position I held Emerick in on top of his strapped in brother as he silently tooted his way through the reading of four books, singing of 3 songs and the happy dance through activity stations, all of which had Thomas so captivated and sweet and polite but happy to be participating, he had his laboring momma eager to venture out into public, halflings in tow, again and again in the name of remembering there are life forms outside our home and they talk in lovely voices.

We love lovely voices. And books. And babies. And a toddler who sheepishly approached the high-pitched and enthusiastic librarian with his hands nervously clasped so he could quietly ask to look at the bubble gum book she just read as if he had found a treasure.  Heck yes, my son.  You grab that book and say thank you and read your heart out so I can swoon and swoon and whip myself up into madness transforming four peoples into normalcy within an inordinate amount of time and eek back in here next week to head, shoulders, knees and toes our smiling, sweaty selves all over again!

Posted by Ashley Anderson at 11:31 AM