Sinking into Chairs & Flailing in Water


I arrived at college very assured of my athletic abilities.  As a runner in high school, I was competitive and fueled by an insatiable appetite to improve.  My felt strength, both physical and mental, served as a great portion of defining myself.

And as fate would have it, I met one of the most wonderful girls my first year in college, Megan Smith, who would unknowingly humble my inflated sense of self.  She, like me, knew of her impressive capabilities as an athlete.  Only she wasn't a runner.  She was a swimmer.

I can't quite remember the origins of her teaching me how to swim, but I would bet it was a mix of late night hyper chatting so characteristic of college free time and my incessant, driving desire to learn.

On a string of Sunday afternoons our Spring semester, she dedicated time at the campus pool, teaching me how to breathe, turn, and carry out the form of particular strokes.  She played coach and I played a very convincing student.  The kind of work required in the pool offered little transference from that of the woods, tracks, paths, streets that I knew so well.  Our first session left me nearly speechless.  I admitted to her that I had underestimated the demand on a swimmer.  Dang, this is tough. I'm dying in there!

I think back on those memories and I'm very grateful Meg took the time to humor my fascination and patiently offer me a chance to learn something just because.  She fostered in me an appreciation of swimming and multiplied my desire to seize chances to learn.

Which is one of the million reasons I would get myself into the mess below [staring at a computer screen full of spreadsheets, data, and specifications for the two and a half hour drive to my parents' home for Christmas] 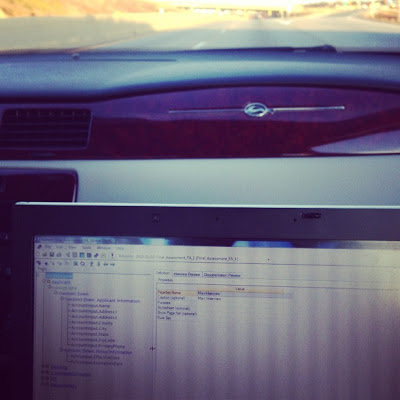 History repeats itself.  I jumped into learning something outside my comfort zone last year and soon after found myself miserably inept.

My drowning took shape inside of a cafe on a cold night this past Fall.

I sank into a leather chair in the middle of the coffee shop, laptop glaring at me from its perch on my thighs, while I tottered between shouting into the phone frantically and whispering statements of self-deprecation. My husband heard my panic, my scattered questions that started with stems like, "How the heck do I...?", "Well, how would I suppose to know...?", "And, really, I'm telling you I have NO IDEA WHAT I'M DOING, SO HOW IN THE WORLD....?", and my need for a slap to get it together.

"Ashley, as long as you don't think you can do this, you won't be able to.  Stop saying that.  You can do this.  You are capable!"

The same dialogue I had given to my students so many dozens of times in the past.  Light bulb.  So this is what it feels like to fear you won't learn, to fear that there's no use trying, and to be embarrassed for being behind, lost, and so desperately confused.

I had taken on a second job grading assessments for my husband's company.  Essentially, I signed on to help ensure an individual can accurately and effectively write code as requested.  It pales in comparison to the complexity of what my husband manipulates, reads, writes, and/or manages.  Knowing that I would have a stand-by tutor, bolstered my confidence in picking up the work, but my enthusiasm for this new mental challenge dwindled quickly when I realized I had the computer skill set of a woman who has been hiding in a cave since birth, technology a pulsing mystery of machinery completely fuzzy, foreign, and frightening in her understanding.

And I say this because the questions I had to ask my husband in the beginning were not detailed questions or questions of divergent thinking or questions to affirm my accuracy.  They were questions about about how to capture a screen, manage documents efficiently, and questions about the map of code in front of me which read as some fragmented, nonsensical archaic language.

Months later and my hypothesis is playing out.  Learning something new, just because, is building new connections in my brain.  I'm feeling a new pulsing strength, even amid an apprenticeship in all things humbling.

My husband offered words of encouragement and once I calmed down and broke past the I-just-can't-do-this barrier, answered my specific and logical questions.  Despite adoring my husband, it is my trainer, Craig, that I owe the greatest bit of gratitude.  He has the gentleness of a saint paired with incredibly explicit instruction, clarity, and persistence.  Signposts of all great teachers! I'm indebted to these two wonderful men who have given me the chance to dabble in something new, allowing me to take a risk with time and resources we all work so hard to preserve.

I think it is important for all of us to consider what new ways we can challenge our spiritual, mental, social, and physical capabilities.  Our new journeys can be in things that branch from what we're already doing, or they can be in planting new seeds, unsure of what will exactly come of that.  It is never too late for us to learn something new, or too early.  It is never impossible.  And it is always fruitful.

I see all things connected even when they appear random.  When we push ourselves to dive into something new, we can be frightened that we'll sink, flap around in the water to the amusement of everyone else, or maybe the scariest of all, just prove mediocre, but there is something so exhilarating in having opportunities which we allow to surprise us rather than simply saving ourselves for those things wherein we feel so very safe.

What might you allow yourself to learn if you weren't worried of its direct usefulness in your life?  What hobbies do others engage in which intrigue you?  What is something you heard, saw, or read today which could serve as a springboard for further discovery?  Have you also found yourselves sinking into chairs or flailing in water but empowered all the same?


Posted by Ashley Anderson at 3:12 PM