The goodness of going beyond 1 kid 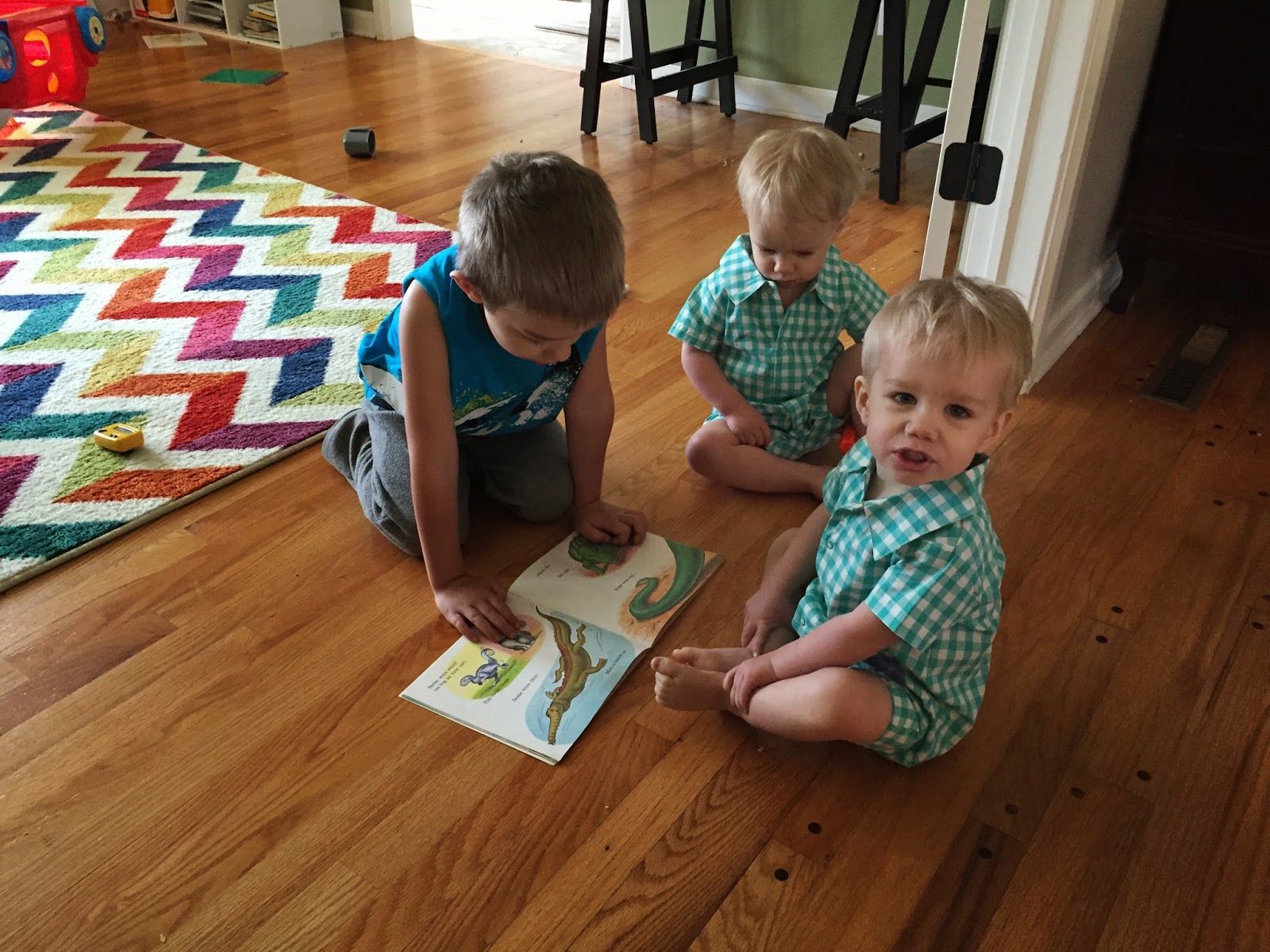 I, vacillating between both great pride and great disappointment, thought pretty much everything that my firstborn was and acted and did was about me. Oh sure, I wouldn't have said it aloud. It was more of a feeling I had. It was because of MY dedication, MY sleep training, MY influence, MY effort, MY personality. And some things are about me. But the longer I'm a mom, the more I've discovered that these little people arrive all their own and we are witness to a great many things that have nothing to with us. Do we help shape them? Oh yeah. Do we help with perimeters and discipline? Sure. But there are these amazing moments that just kind've blow the lid off the pot. Here's one that just is about as true and honest as they come.

If you ran into me in public out for groceries or a bored stroll through Target, I would stop my crew (depending on store, with 1 or 2 carts) and the following would happen. I would get in a brief amount of chit chat with you and then Thomas would ask to speak.

He may say "excuse me" or "who are you" or "I don't know you" or be rude and jump straightaway at one of a dozen questions he plans to ask you.  He is like one of those toys you wind up and they vibrate forward just because they can... only he is permanently programmed for such, no extra winding necessary. He will ask you all sorts of things if you don't run off right away. About your day. How you know his momma. What you dreamt about last night because he dreamt about a tornado sucking up his ninja turtles. If you like pb&js as much as he does.

The entire time this is taking place the twins will sit eerily still. They will calmly stare at you, sweetly boring into something they know nothing about, you, and would maybe, probably, like to keep it that way. They will sit so still it is as if they are playing a game of hide and go seek and their hiding spot happens to be in a shopping cart under massive fluorescent lighting. They won't talk to you. Not likely. What is likely is that they will listen to everything you say.  And stare. And sit like baby ninjas. 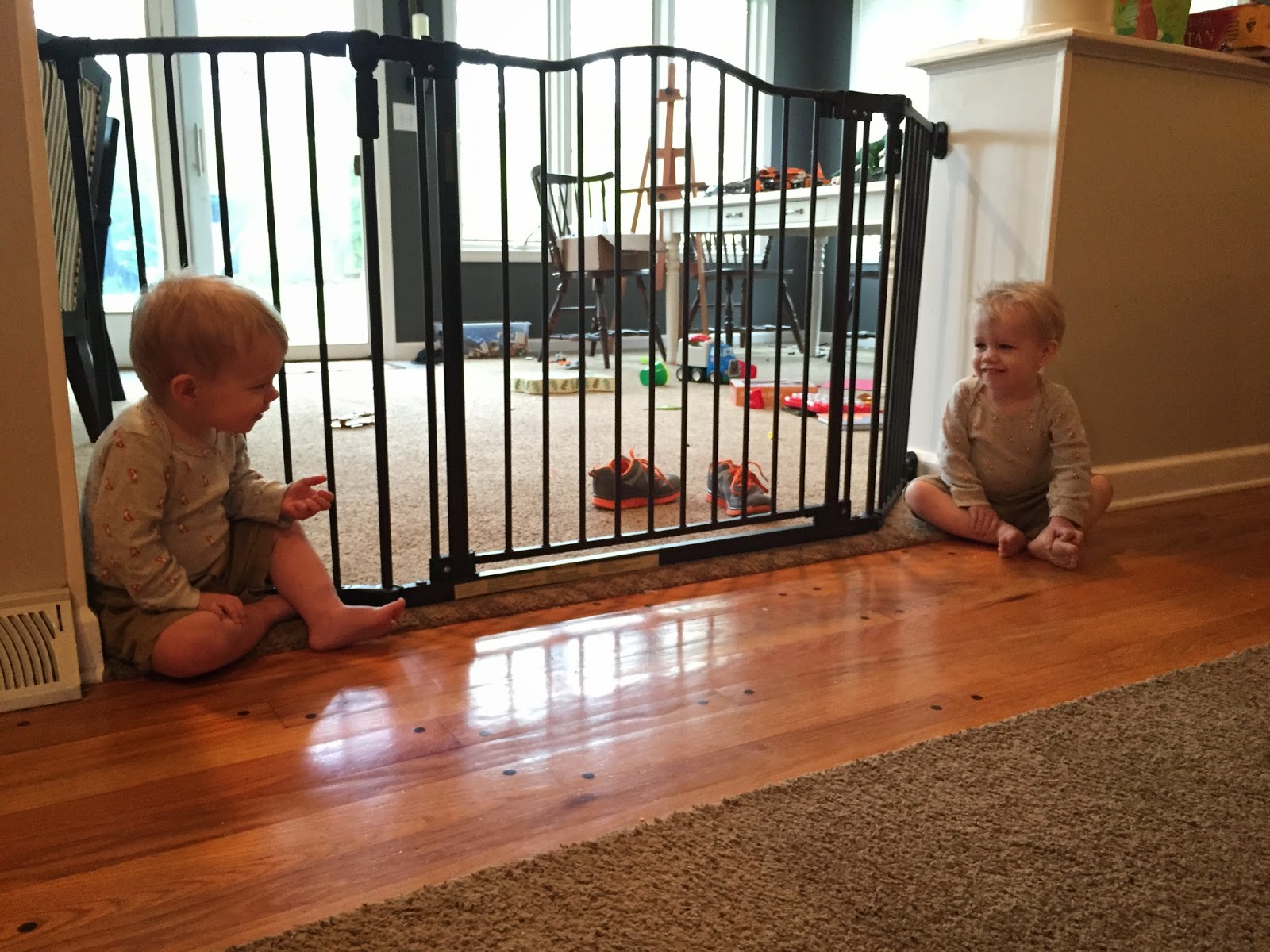 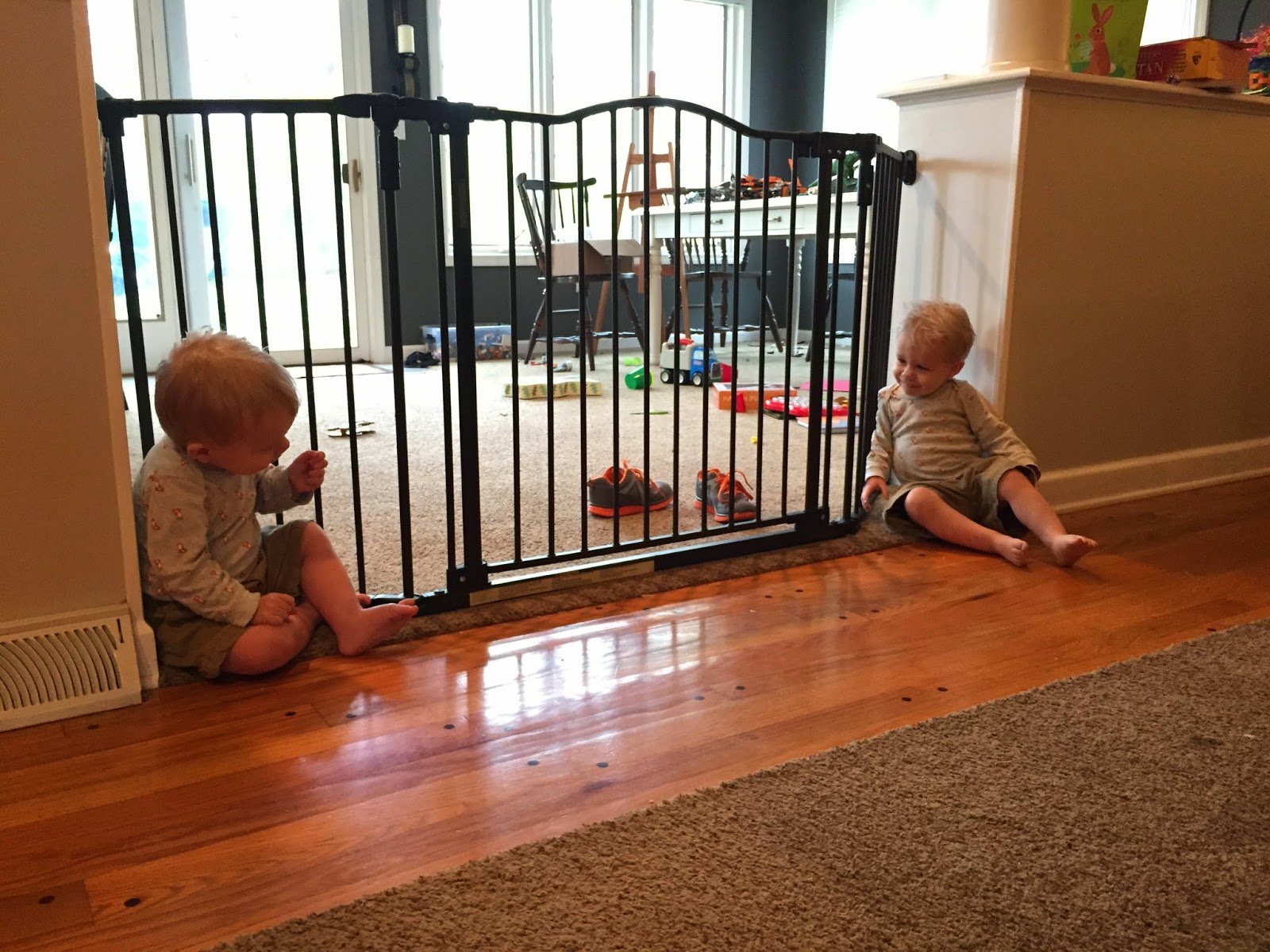 I don't blame them. What's the point? Thomas does 90% of the talking around here. Good for him. I think the only time he stops talking is when he is eating. A couple nights ago at the dinner table I asked the kids if they wanted to talk about what made their day great. Like an old soul, Thomas raised his hand just a bit and with expertly squinty eyes as if after deep contemplation said, "let's just be quiet and not talk and enjoy our dinner."  Alright then. So there. He does stop talking sometimes.

Speaking of the dinner table, there's another budding development of contrasts between the kids.  Alistair and Emerick have taken it upon themselves to tell Thomas and I (and Paul when he's here) to pray before we eat.  As soon as I sit down, Alistair (very adamant about this) gets my attention in his nonsense blibber blabber and pressing his palms together so I will start the blessing. As we say grace, Alsitair and Emerick beam that we've remembered and when they go to make their disjointed and adorable sign of the cross, I look across the table to Thomas and rummage through my guilty mom files for a memory of Thomas EVER trying to make the sign of the cross, but he's busy being quiet so I don't bother to ask. 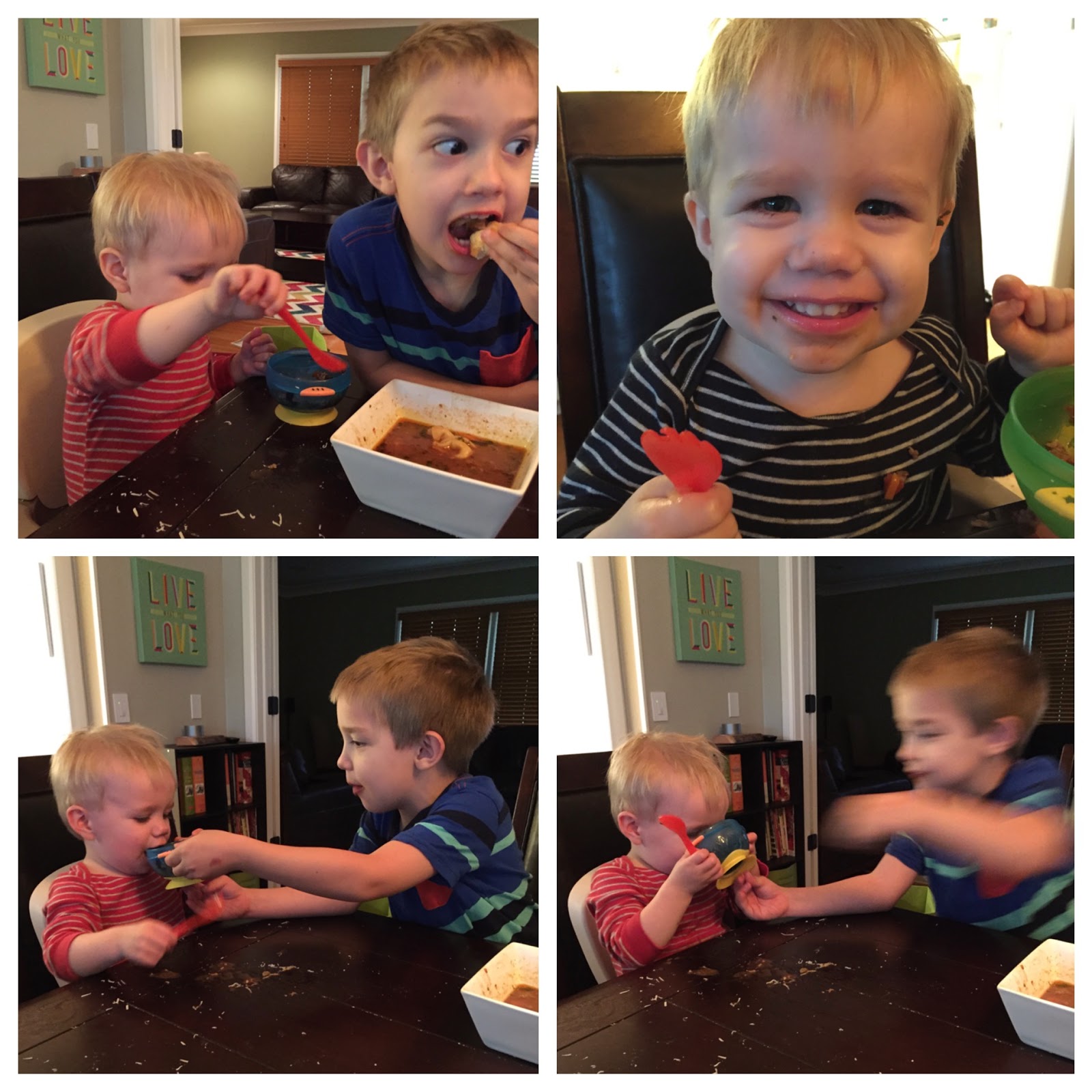 Why doesn't that mom just let her kid cry it out? That little girl is just upset to be left at day care because she can sense her mom's anxiety.  Oh, and this one makes me cringe... If she would have just tried a little harder, she could have made nursing work.

These are not pithy examples. These were real. These are real judgments I really felt. And now, oh now. Ha!

I've had both a child who could sleep through a tornado passing over his body and a child who wakes for sips of water as if his delicate system will just die if he doesn't have a touch of water before drifting off to sleep again.

I've had both children who are as happy as can be to be left in the care of someone else and playing with toys that are different than the ones we have at home and one (Emerick at the moment) who wants nothing more to be safely in the arms of his momma. Much tears. MUCH tears.

I've had a nursing experience that was calm and beautiful (except when he would hit me on the chest) and one that was difficult, overstimulating and altogether an experience that still makes me want to put a bumper sticker on my car that says, "I CAN DO HARD THINGS!"

My kids humble me right out the gate with those darn c-sections.  No warrior, hear me cry, see me push, watch me bloom kind of birthing experiences for me. And I've been on the receiving end of that judgment. Hashtag truth.

I know just as true as the sun that there are women who think if I would have just read a little more, asked a few more questions, waited a little longer, gone to a few more classes, tried a little harder, cared a little more, challenged a little more, interviewed a different doctor, had a better plan, and prayed a little harder THEN I would have done it the right way. I know this because I've seen it written across their forehead as plain as day, like that involuntary underwear exercise we're encouraged to use when speaking in public...only in this case we can see that our momma friend is thinking their naked thoughts right on their face and you want to look away but you can't and you can't believe you can see them but you can and you wonder if she realizes she's naked.

It's one thing to say we aren't judgmental. It's another thing to truly bridge the gap between what we know to what is unfamiliar.

For me, having 3 kids has pretty much built that bridge.  Some of you don't need 3 kids to make that happen. Good for you. You rock. I would hope we all don't have to have multiple kids to grow in understanding of each other. No, yeah, that's not right. There's lots of ways to do that.  But since I'm more or less huddled up with these kids of mine day in and day out (whom are vacuuming as a team, without supervision, the spices that the twins dumped out while I finish this post), I'm glad that I'm growing closer to others in the process even when I'm isolated.

And just to make it clear what that means. It means me watching my kids grow into their own and realizing every day just how dumb it was that I took so much credit and claim for how they've come about. 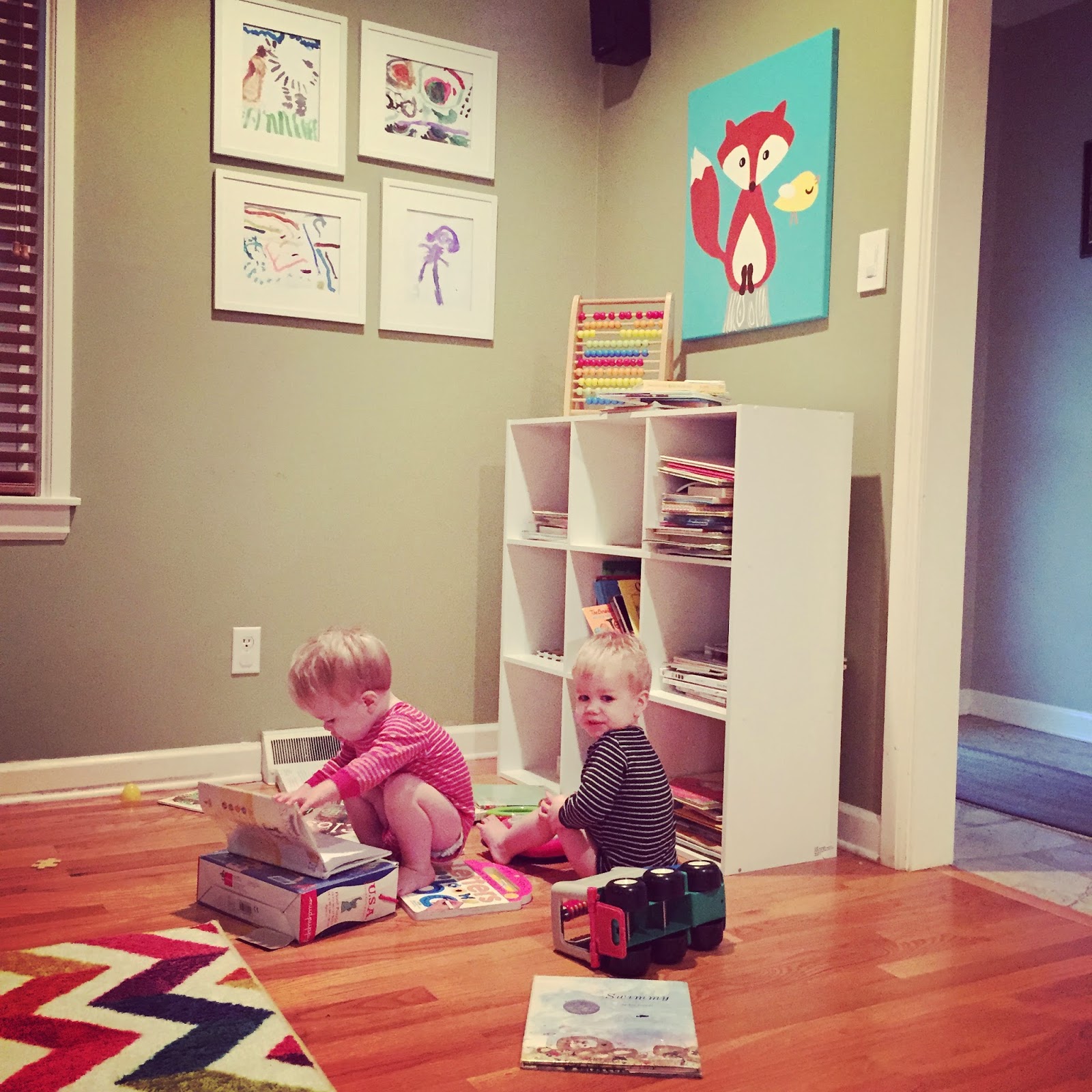 Because I will tell you right now there is no voodoo parenting trick I'm aware of that can get a set of twins to play invisible or a kid to talk until the skin falls right off your body. And I'm so glad I've finally got that cleared up in my mind.

Posted by Ashley Anderson at 6:57 AM

Email ThisBlogThis!Share to TwitterShare to FacebookShare to Pinterest
Labels: Motherhood