If You Give a Girl a Paintbrush 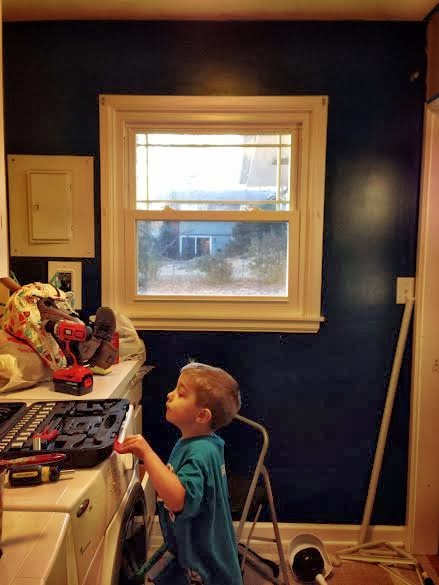 See, making that list meant so much more than that list.  With my personality, there is no such thing as anything simple. I'm all "woah" and "wait" and "hold up a sec", and even after I've started something as simple as painting a room I'm all "guys, this is so reflective of my marriage because blah blah blah long story get on with it, Ashley, and get it done".  Anybody still following? Super.

I was saying that the list, now that it's done and made and my friends and family and YOU are cheering me on to be more than a milk machine for the twins, is expanding into this much larger thing than I thought it could or would be.

Case in point, #25 is "redecorate our master bedroom" [and yes, there is a whole long, huge, melodramatic reason it made the cut for the list, so those curious or itching for torture will get that later], but I knew I couldn't start that until I fixed the really, really crappy paint job Paul and I collectively threw up on the walls of our guest bathroom some odd  months years ago and have been ignoring ever since.  It was some light blue nonsense that was reminiscent of an old person's something or other. It was just awful.

We bought paint a while ago for a bathroom plus connected laundry room do over, and it's been waiting patiently and I was procrastinating just as well as I always do.  That was until a few days ago. 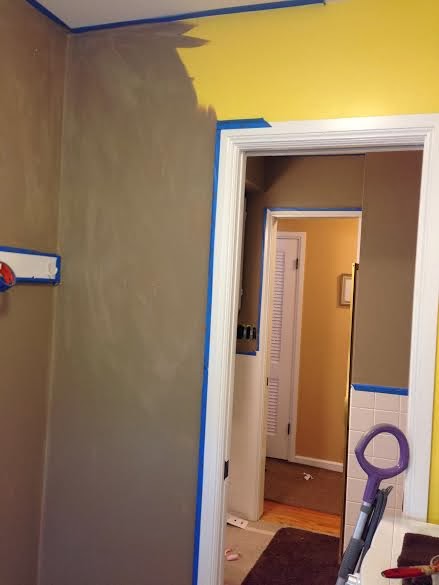 After taping and painting and painting and patinting... my friend Natahle brought me over a brush to use (and I imagine it has a name and I have not the first clue what to call it) to "cut in" the paint with rather than using the painter's tape.  That whole learning curve thing. Yeah, I'm all over that with the painting. Cue the horror---ree ree ree ree Psycho shower scene---music.  I actually almost cried this morning because so. much. work. I have a bit of a lazy streak when it comes to doing something new or old or required or really anything.

But no amount of laziness can succeed in ignoring a NAUTICAL THEME IN A LAUNDRY ROOM. I know. I know. Anytime I do laundry I think, you know what this reminds me of?... fish. and sailing. and lots more fish. I bet you all do. Laundry = billowing sails. Laundry = water = ocean = fish. It all makes so much sense to me that it makes no sense at all. Just in case the photos don't seem real to you, yes that's a yellow brighter than the sun and yes, those are fish drawer handles. What more could a girl want?! When we were buying the house and biting our nails, we all but declared, "But it's got a nautical themed laundry room. We've just GOTTA have it!!" 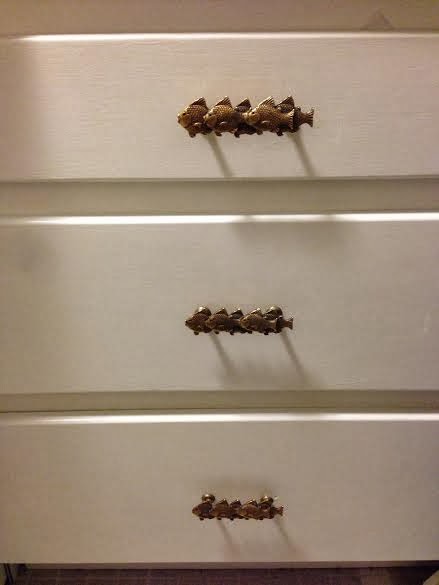 Alas, after the third infraction of shenanigans by the hand of my neglected-while-mommy-paints-the-laundry room 3 year old, I decided painting wasn't safe during the hours of 6 am to 8 pm which explains why it hasn't happened until now.  I thought, caffeinated as I am, I would clean the windows behind the couch in the sun room. Moving the couch in the sun room meant vacuuming there too. And since the furniture was already moved and the windows so beautiful, I thought I would just rearrange all of it. Once I rearranged all of it, I was annoyed with all the kids' books pouring out all over the place in a million different places and decided to ship them back to other areas of the house per help of the 3 year old who was now occupied not with shenanigans but "neaking around like a minja to spy on the babies." Then I saw dirty book shelves, so I started wiping them down which made me realize how messy and cluttered they had become and so I started tidying that area. I saw our "look book" binder and realized I probably needed to transfer that stuff digitally or maybe no but oh my gosh, our wedding album!!!

Babies started crying and I came back to reality.  If there weren't any kids here, I swear I would have this place perfect.

I've had a lot of coffee today, people.

Posted by Ashley Anderson at 2:37 PM