I need the Blogger version of police tape wrapped around this post.  Warning. Enter at your own risk. Danger. Do not cross ... a postpartum woman hoping for a coherent post.  Dead grammar and vocabulary inside.

With that being said...

We've got a big brother in the Anderson house. A stork dropped him off, swapping him out for his younger looking and quieter version. 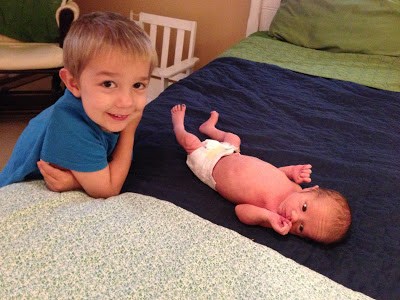 Thomas is warming up to his new role as #1 little person of the Little Persons Anderson Brigade quickly.  He's heard one hundred different ways from mommy and daddy NOT to touch his brothers and yet has managed to find himself both in the episodes of hijacking a baby swing (baby inside) and the operation of thermometer near baby's head in the past 24 hours.

Despite his wavering understanding of, "NO. NO. That's dangerous!!", his sweet demeanor has been off the charts, evidenced below, in granting each of the boys their own bear to "take good care of and don't lose", in just one of dozens of ways he's made sure the twins are in good care. He's showered kisses, hugs, and pats on burping backs to his brothers sending my heart into a melt fest, oozing soft and primed for the impending contrast which rains down on me when a random act of Thomas's kindness, in the form of suffocation or screaming, sends me into cardiac arrest. 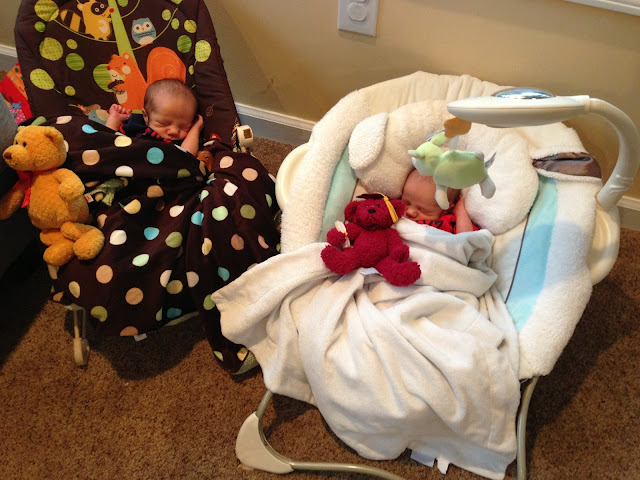 Yesterday, I snatched him away from Superman play to do a little spa treatment with the persons he often refers to as "those guys".  As in, "I think that guy needs a blanket too." And "that guy there wants a pacifier." This is an upgrade from his initial insistent observance that he was still the only male child of the house: "I want to kiss her"; "Her is crying again."; "Her has a penis like me..." 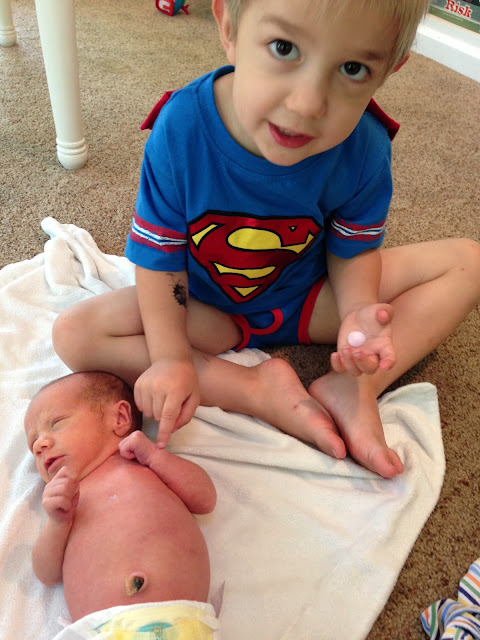 Tandem nursing has afforded Thomas a crash course in milk production.  A few snippets of a curious three year old wrapping himself around the concept:

As well as this:

Me: "Lots of animals feed their young milk."
Thomas: "Do they take off their clothes too?"

And at day care, after professing love for "his babies", he told all the kids and his teachers that they "drink milk from mommy's boobs".

Needless to say, we're all adjusting here.  T.V. has been on more than normal.  I've definitely done that grit your teeth while growl-talking bit once or twice. And Paul and I are trying our darndest to sweep in with some extra love on both sides for our first born.

Kid knows he's still got our hearts on lock.  No doubt about that.

Paul took a doze with him for nap time but got out of bed for a minute to grab some medicine.  Thomas said, "But don't you want to sleep with your favorite best friend, buddy?"

All is well in the land of streaming Netflix and mother's milk.

Posted by Ashley Anderson at 3:19 PM