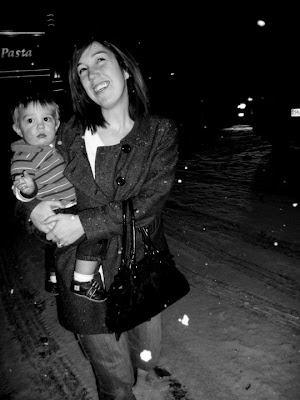 Today is snow day #10. I would like to think I know a little bit about barricading oneself in from the elements outside.

My husband could not make it into work two [or was it three] days last week when the Blizzard of 2011 hit. In fact, management informed the company Do not come in to work! And we echoed back O---K---!!


Paul is a programmer, a computer guy, a translator of weird numbers and symbols --if you ask me. In our home there is no space for an office. There is just "the space". To put it nicely, the foyer welcomes you to the living room and the living room welcomes you to the dining area and the dining area welcomes you to the kitchen. And in that space of our home laundry is sorted, bread is made, the baby is wrestled, dancing show-downs go down, and ... conference calls are made.  Last week, when Paul would ahem us out of the room, Thomas and I scooted ourselves into his bedroom and barricaded ourselves from daddy's work.

I gentled rocked with a book aimed in line of Thomas playing. I set my red mug of cold coffee on his window ledge where just outside large snowflakes fell into the mass of white.

Pure in his play time, I sat there watching him undisturbed, unbroken. Sometimes, I don't want to muddle it. Wrapped in my white blanket, knees brought to my chest, I watched his inquisitiveness trail behind him as he moved from toy to toy.  His questions, spelled upon his furrowed brow, tumble forth like waves crashing on the shore. He laughs at himself when he gets it right and tries again if he doesn't.

When time called me to uncoil myself from that comfortable spot of seeing my child unspoiled like the landscape of generous new snow, I got to his level and tried my best to not think, not dream-- just be. We chased each other around his plastic hand-me-down zoo contraption. I would pop my head above the yellow and yell the ever cliche phrase I'm gonna get you! He would squeal and shake, clap his hands, sit up and open his eyes wide in realizing it was his time to crawl like his little potbelly's life depended on it.

With trails of coding conversations seeping beneath the door, we continued to read our letter books, tear apart blocks, and sing silly rap songs which induced this Momma to laughing at her hilarious ineptitude. Ah, he doesn't know; I'm his everything when he's looking up at me... [making a crazy fool of myself!]

Typically, I'm running around my house, finishing dishes and laundry and feeling kinda crazed about all there is to do. And typically, my adorable, big-eyed baby is grasping my yoga pants [which he in record time used as his means to capitilize on his height] and staring up at me with a plea of sorts in an octave of mmm or bbbb or  ddd shs gggbb. You would think, at every moment, I would stop, scoop and do the above, but I don't. I look at him with a "Can't you see your Momma's got a million things to do?" look. Ok, well, sometimes.

I'm glad for those moments where I'm forced to slow down, even stop. I'll be welcoming the barricade, or even creating my own from time to time.
Posted by Ashley Anderson at 11:36 AM

Email ThisBlogThis!Share to TwitterShare to FacebookShare to Pinterest
Labels: Being Mom, Thomas